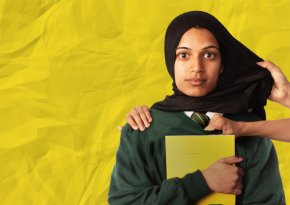 Amnesty International Freedom of Expression and Fringe First Award winners LUNG (E15, The 56 and Chilcot) follows the real life stories of Muslim teachers and governors who were accused of plotting extremism in Birmingham schools.

Trojan Horse was a local story that hit the national press, accusing ‘hardline’ Muslim teachers and governors of plotting extremism in Birmingham schools. Adapted from the real-life testimonies of those at the heart of the UK Government’s inquiry, critically acclaimed theatre company LUNG investigate what really happened. Originally developed with Leeds Playhouse, Trojan Horse is the story of a community torn apart by racial division, ‘British values’ and the culture of Prevent. Making theatre with communities, by communities and for communities, LUNG is a national touring theatre company, developing innovative and politically driven work that broadens horizons and investigates modern Britain.

'Perhaps the bravest and most astutely political of shows on up in Edinburgh this year in LUNG’s Trojan Horse. Piercing, relevant, terrifying and beautifully told…' ***** WhatsOnStage

'A boldly physical and passionate piece of documentary theatre, which looks beneath the headlines to the stories beneath' **** The Independent

'Trojan Horse is an urgent, important play that should be seen by everyone' ***** British Theatre Guide