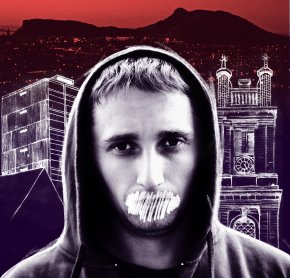 Following a sold-out run at the Edinburgh Fringe and after winning the prestigious Carol Tambor Best of Edinburgh Award, the gripping hit about class, culture and appropriation makes its Glasgow debut.

Salisbury Crags. A woman takes a step forward into the air. A teenage boy pulls her back. Two lives are changed forever. Libby whiles away her days in New Town cafés and still calls herself a writer. Declan is a talented young artist struggling with a volatile home life on the city’s outskirts. As they form an uneasy friendship, complicated by class and culture, Libby spots an opportunity to put herself back on track, and really make a difference.

Frank, unflinching and threaded with unexpected humour, Mouthpiece takes a look at two different sides of Edinburgh that exist in ignorance of one another, and asks whether it’s possible to tell someone else’s story without exploiting them along the way. From the award-winning writer of Beats (now a motion picture) and directed by former Traverse Theatre Artistic Director Orla O’Loughlin.

Supported by Creative Scotland and City of Edinburgh Council.

'[A] ferociously clever drama… Mouthpiece is heart-in-mouth moving [and] grimly exhilarating.' **** Time Out