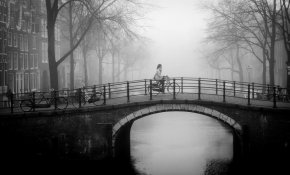 A violinist. Living in her trendy canal-side Amsterdam apartment. Nine months pregnant. One day a mysterious unpaid gas bill from 1944 arrives. It awakens unsettling feelings of collective identity, foreignness and alienation. Stories of a devastating past are compellingly reconstructed to try and make sense of the present.

Amsterdam is the UK premiere of a strikingly original and audacious play. Maya Arad Yasur is a prize-winning playwright, whose work has been produced worldwide. This is Matthew Xia's first production as Artistic Director of Actors Touring Company.

'Enormously rewarding. Yasur's play is orchestrated with musical playfulness by Matthew Xia in his debut production as Artistic Director of ATC.' Lyn Gardner

'The vibrancy and cheek of the production – the theatricality - is the kind that British theatre sees all too rarely.' Theatre Va Va Voom!

'Brilliantly directed by Matthew Xia, [Amsterdam] is an excellent showcase for his nerve and imagination' Evening Standard

'Unique and brilliant...the cast is sensational...Xia has staged the play with great care...Amsterdam is a play that deserves to run for years.' The Play's The Thing